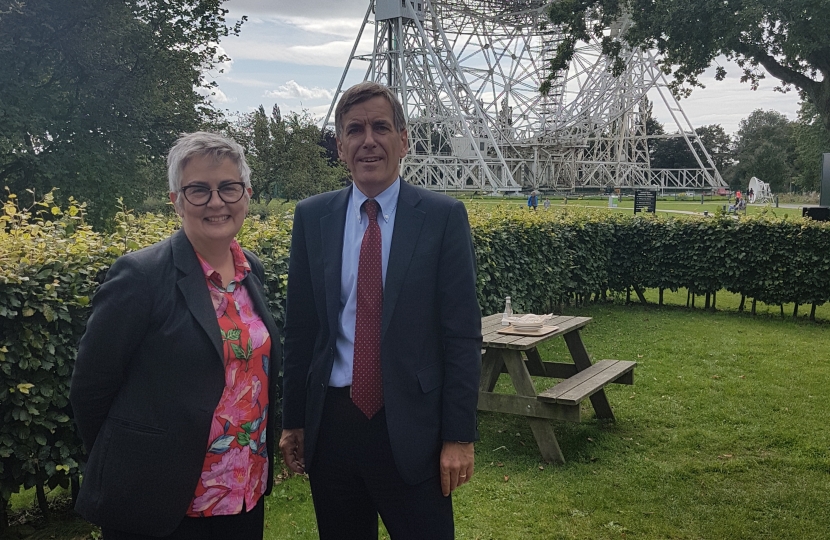 Jodrell Bank continues to be a leading centre for scientific learning and research, following its recent recognition this year as a UNESCO World Heritage Site, and its selection as the global headquarters for the Square Kilometre Array telescope project. Local MP, David Rutley, visited the site recently, to praise the team there on these exciting developments.

On his visit, David met with the Director of Jodrell Bank Discovery Centre, Professor Teresa Anderson, and congratulated her and the entire team at the site on another positive and important year for Jodrell Bank. They first reviewed Jodrell Bank Observatory site's award of World Heritage Site status by UNESCO. This recognised its international, historic, and scientific significance, helping the site to further promote its rich history. Although formally proposed for this recognition in January 2018, Prof Anderson explained that preparations were a decade in the making. David was very pleased to learn that the increased profile gained from this recognition has significantly boosted visitor numbers to the site.

This positive achievement followed hot on the heels of the official opening in July of the Square Kilometre Array Global Headquarters, which are located at Jodrell Bank. The soon-to-be largest radio telescope in the world will have its instruments in Australia and South Africa, with Jodrell Bank providing vital co-ordination for the observatory's activities in exploring the universe in even greater depth and detail than has been possible before, further enhancing our understanding of Space.

Jodrell Bank's summer of success was topped off by the annual Blue Dot Festival. Prof Anderson highlighted the number of younger visitors during the Festival, demonstrating how Jodrell Bank continues to fulfil its mission of inspiring the next generation of scientists. A total of 32,000 people visited Jodrell Bank over that buzzing weekend.

Speaking after his visit, David said, "Jodrell Bank has led the way in scientific research and development for over sixty years, and these impressive developments demonstrate clearly that this well-deserved reputation continues. It was great to catch up with Professor Anderson and her team and to hear more about what these exciting developments mean for the site and its ongoing work to promote Cheshire's continued position as hub for science and research. I will continue to actively support Jodrell Bank’s future ambitions in the months ahead."