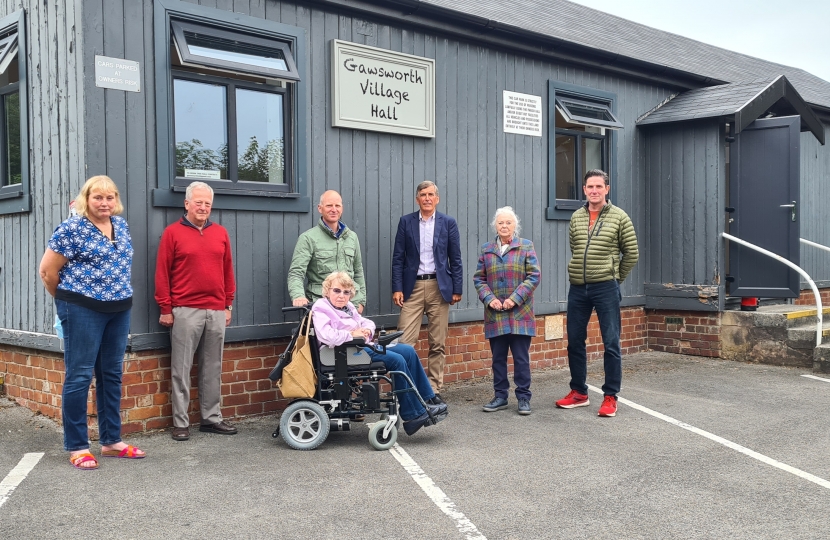 Macclesfield’s MP, David Rutley, has continued to add his voice to strong concerns from many local villages about how plans in Cheshire East Council’s Community Governance Review will have a damaging impact on the identity of and community spirit in local rural communities.

At the meeting, local councillors explained how the latest plans would lead to residents in the Gawsworth Moss area becoming part of Macclesfield Town Council, which would expand from 12 to 24 councillors. These plans would see more homes currently represented by a rural Parish Council being absorbed into a much larger Town Council and increase the fundraising capabilities of that larger Council. They were also concerned that the plans would weaken the voice of local residents in the affected area in opposing future proposed housing developments.

Other villages have also expressed their strong concerns about the latest proposals. David has met local residents in Lyme Green, who are also opposed to becoming part of a larger Macclesfield Town Council. Eaton, Marton and North Rode Parish Councils each want to see plans to merge these Councils rejected, while there is also strong opposition to proposals that would bring Macclesfield Forest, Wildboarclough, Wincle and the rural parts of Sutton Parish Council into a new Council.

Local residents now have the chance to express their views in the public consultation on Cheshire East Council’s Community Governance Review, which can be accessed here: https://surveys.cheshireeast.gov.uk/s/CGReview2/ The consultation runs from Monday 6th September and ends at midnight on 28 November 2021. Paper copies of the consultation can also be obtained from local libraries. Cheshire East Council aims to complete the process well before the scheduled local elections in May 2023.

After the meeting, David said, “It’s time to speak up for the rural communities affected by Cheshire East Council’s proposals. We need to go on protecting the integrity and unique identities of our local villages and I will continue to campaign with impacted local communities to object to the plans that have been set out in the consultation. I would urge as many local residents as possible to actively support our rural communities by expressing their views in the consultation over the weeks ahead.”