Gradus Goes On Making The Grade 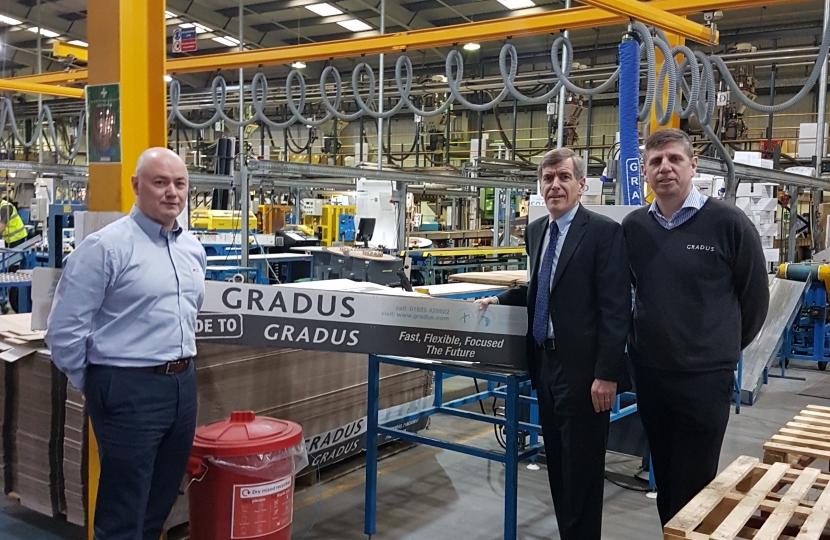 In recognition of the important role that it continues to play in the local economy, Macclesfield-based business, Gradus PLC, was visited by local MP, David Rutley, to thank its dedicated staff and leadership team for their important work.

Founded in 1966 and currently employing over 300 people in local area, Gradus is an industry leader in the Contract Interior Solutions sector, providing a wide range of interior solutions for offices and other buildings, including stair edgings and floor trims, carpets and vinyl flooring, entrance mats, wall protection, and even LED lighting. David was joined on his visit by Mr Ian Sykes, Operations Director at Gradus, who gave him a tour of the company’s impressive manufacturing facility in Lyme Green, just outside of Macclesfield, which is one of a number of sites that the company manages in the local area.

On his visit, Mr Sykes updated David on the company’s exciting plans for the future, explaining that it is focussing on expanding its services with new partners in important sectors such as education, retail, leisure and hospitality. This is in addition to the well-established and highly-regarded experience that it has developed in the healthcare sector, with its products being installed in many prestigious healthcare facilities, both in the UK (such as Manchester's Christie Hospital) and internationally.

In addition to meeting with Mr Sykes, David was also joined on the visit by Mr Anthony Bullock, Operations Director of S Cooper & Sons, which is the strategic business partner for Gradus. Mr Bullock explained that his company provides 14 vehicles to Gradus, for the transportation and distribution of its goods, and that this service is an important business partnership for S Cooper & Sons. The company was formerly based in Bollington, having now moved to larger premises in Winsford, to meet increasing demand.

Speaking after his visit, David said, "Gradus is a clear Macclesfield and British success story, with its innovative products being an integral feature of many hospitals, commercial offices and schools.  It is clear that the company plays a positive role in our local economy and I was pleased to have the opportunity to visit its facilities and thank the leadership team first-hand for their important work. It is great to see that the company has got off to such a strong start to the year, and that its important strategic distribution partnership with S Cooper & Sons is set for continued success.”