Full Steam Ahead For Anniversary Of Former Railway 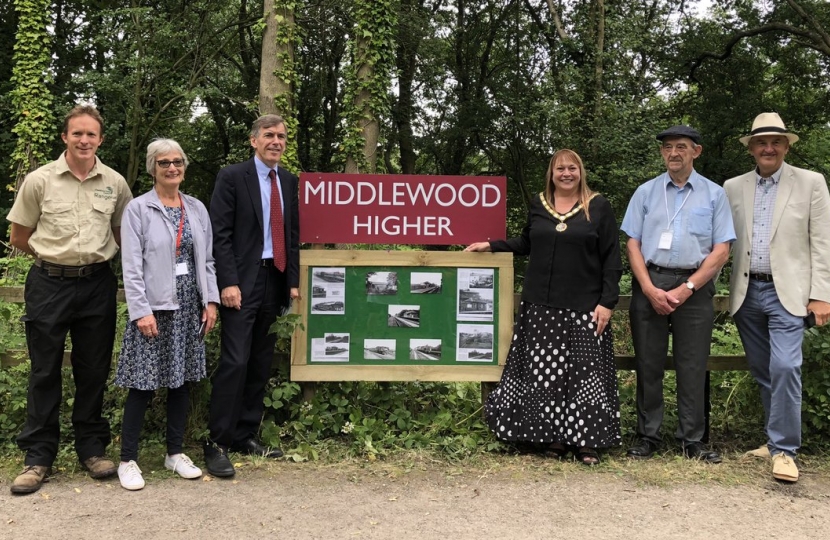 To commemorate the approaching 150th anniversary of the opening of the former Macclesfield, Bollington and Marple Railway (MBMR), local MP, David Rutley, attended a special ceremony for the unveiling of a blue plaque at the site of the line's old Middlewood Higher railway station, now on the Middlewood Way, in Higher Poynton.

The ceremony was officiated by the Mayor of Poynton, Cllr Sarah-Jane Gilmore, who performed the unveiling, supported by David. In addition to the blue plaque, local volunteers have raised funds for the installation of a replica heritage station board, of the kind that would have stood on the platforms of the station, and a separate display board with photographs showing the line in its heyday. All of these can now be viewed on the Middlewood Way, near to the current Middlewood station.

The ceremony on Friday was followed by a special cycle ride on the Saturday along the Middlewood Way, starting at the site of the former Rose Hill station near Marple, enabling those taking part to take in the full extent of the former MBMR. A walk on Sunday along the old route also took place.

Middlewood Higher railway station was opened on 1st April 1879 by the MBMR to provide an interchange with the nearby Middlewood station on the London & North Western Railway (LNWR) Stockport to Buxton line. Middlewood Higher station crossed over the LNWR line, presenting an unusual multi-level interchange, and giving both stations their respective names.

Although busy during the summer months with visitor traffic, the station was little used outside of this period, due to its very rural location, and was earmarked for closure, which took place on 7th November 1960. The entire MBMR, excepting Rose Hill Station near Marple, closed on 5th January 1970. The route is preserved as the very popular Middlewood Way, for use by walkers, cyclists and horse riders.

Speaking after the ceremony, David said, "As we approach the significant 150th anniversary of the opening of the Macclesfield, Marple and Bolllington Railway, it is fitting to mark this important occasion with this plaque. I am grateful to all those volunteers who have contributed to erecting the plaque and station signs for their positive efforts in highlighting this interesting aspect of our local history, which I hope will enable more visitors to learn more about the Middlewood Way’s heritage."