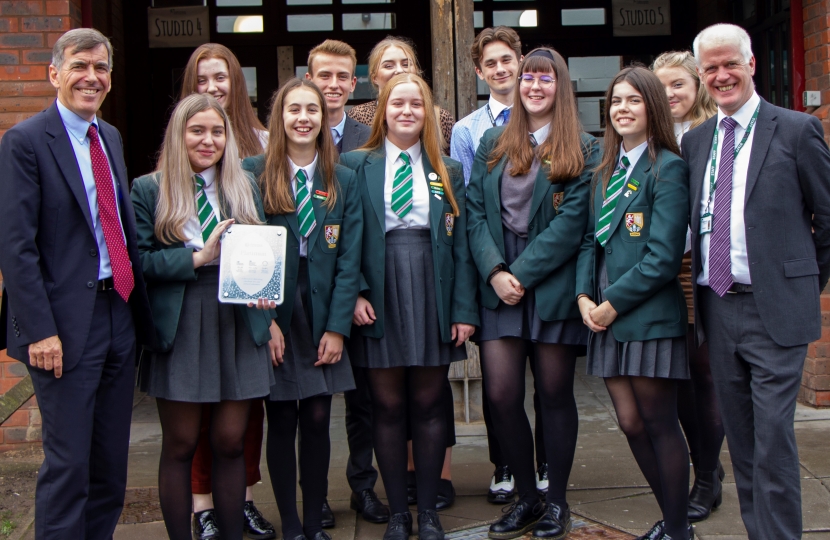 As part of Celebrate Artsmark Week, which recognises schools that have achieved the only accredited quality standard for the arts in schools, local MP, David Rutley, visited the Fallibroome Academy, to see for himself its commitment to promoting and supporting creative subjects and its success in being awarded a prestigious Artsmark Platinum Award.

David met with Mr Francis Power, Headteacher of Fallibroome Academy, and Mrs Karen Fay, Director of Performing Arts at the school, and some of the young people who are taking this course at GCSE and A Level, as well as young people from across all the school’s year groups. David was very impressed to hear more from Mrs Fay and the students about the strong emphasis that the school places on the arts and creative subjects, and by the enthusiasm of the students for their course and the important skills and values that it teaches them.

This school's positive approach to the arts was recognised very recently when the school was awarded the Artsmark Platinum Award - one of only four schools in the North West to receive the award this year. The award demonstrates that Fallibroome Academy has a clear and strong long-term commitment to promoting the transformative potential of the arts and culture for students, and that it is making a difference in the local community, given the inclusive nature of its art programmes.

On his visit, the students also updated David on some of their exciting future projects, including their upcoming production of We Will Rock You, their annual Christmas Concert,  Dance Show, and a lower school production of Aladdin Junior in the summer term. Details of all the school's forthcoming productions and events can be found at: https://fallibroome.academy/performing-arts-brochure/

Speaking after his visit, David said, "The arts and creative subjects have a vital role to play in the development of young people, and it is great to see Fallibroome Academy embracing this commitment and the inclusive role these subjects can play in the school community. I was impressed to meet with students and staff from the school's performing arts department, and to have the opportunity to congratulate them on receiving the highly sought-after Artsmark Platinum Award – they should be rightly proud of this positive achievement."