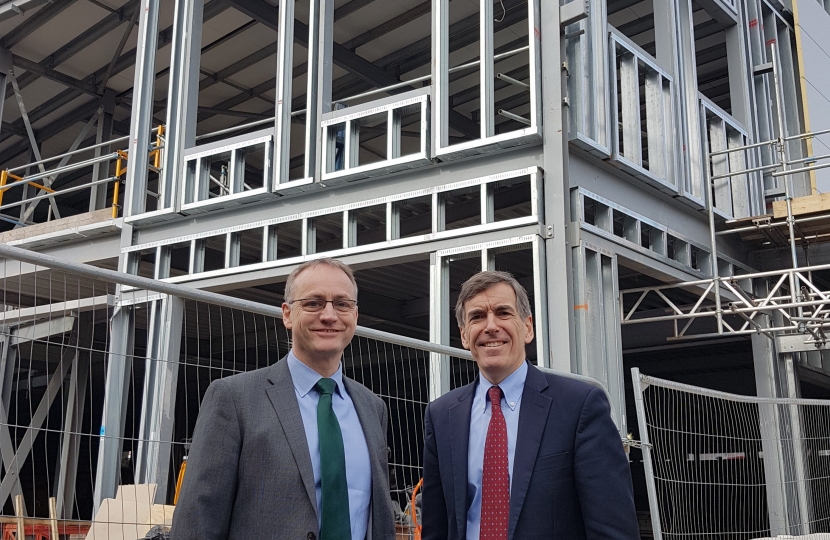 The expansion of the Grosvenor shopping centre in Macclesfield town centre remains on track, as local MP, David Rutley, learned at a recent meeting with representatives from the site’s owner, the Eskmuir Group.

David joined Paul Hodgson, Eskmuir’s Managing Director, and John Sullivan, the company’s Senior Asset Manager, to find out more about the progress of the £11 million major refurbishment of the Grosvenor Centre in Macclesfield, which is due to be opened later in the Spring. The shopping centre is being expanded into the adjacent former Cheshire Building Society site, with a total of 51,810 square feet of new retail space being created, helping to attract big name brands to the town centre.

The façade of the 100-year-old former Cheshire Building Society premises is being retained, with the interior demolished in order to allow the existing part of the Grosvenor Centre to be expanded and connected up to the new shops. Eskmuir explained that there are over 20 construction experts on site co-ordinating the development and working hard to ensure that the expanded shopping centre can open as soon as possible. David was pleased to see first-hand the progress that is being made at the site.

The redevelopment is one part of the wider plans to regenerate Macclesfield town centre. David continues to keep close to how the leisure-led scheme for a multiscreen cinema with restaurants on Churchill Way is progressing, and also continues to urge Cheshire East Council to commit to additional significant funding for investment in the public realm, beyond the £1.4 million that has already been announced.

Speaking after the meeting, David said, “It was good to meet with Paul and John and to see for myself the visible progress being made to expand the Grosvenor Centre, helping to create more retail opportunities and make our town a more distinctive destination for shopping and services. The plans to regenerate and revitalise the town centre remain one of my top local priorities and I will continue to work with residents, businesses and Cheshire East Council, to this vital end.”