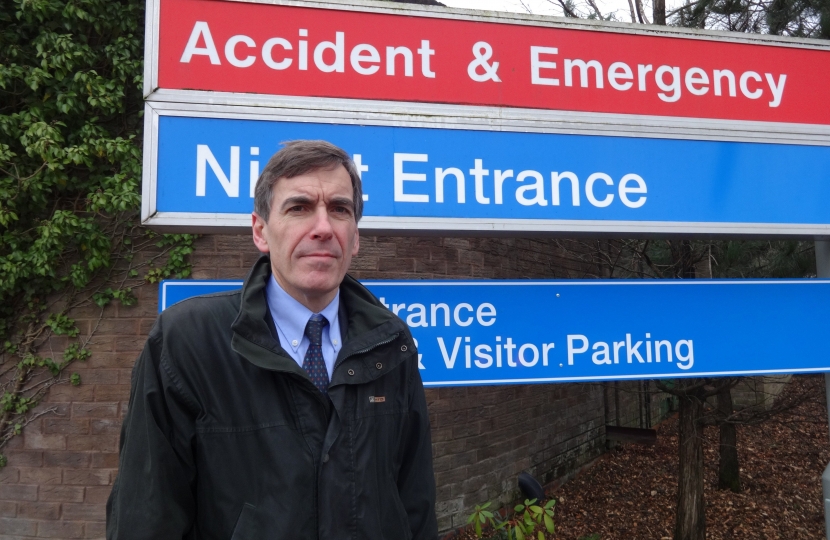 In response to the NHS Sustainability and Transformation Plan (STP) for Cheshire & Merseyside report, which was published on 16th November, David said, “It is important‎ that vital health services, such as Accident & Emergency services, are safeguarded at Macclesfield Hospital, and for surrounding communities that use them, including Buxton, Leek, Congleton and Knutsford.

“The final NHS Sustainability and Transformation Plan (STP) for Cheshire & Merseyside report was published on Wednesday 16th November and sets out that future plans for emergency care are being developed for Macclesfield Hospital in the months ahead, including options involving an Accident & Emergency department, as we have today, or an Urgent Care Centre. No details have been provided as to what services would be provided by such an Urgent Care Centre, but the NHS Eastern Cheshire Clinical Commissioning Group has indicated that typically an Urgent Care Centre is not usually staffed by Consultants in Emergency Medicine and generally staffed by GPs and nurse practitioners.

“Following the publication of the report, I will continue to actively campaign to keep our much valued A & E services at Macclesfield Hospital, working with other local MPs and Cheshire East Council, and to press local health service leaders to set out further details on what options are actually being considered for the future of emergency care in the area.

“It is vital that health service decision makers understand the strength of public concern and how clearly local residents want to keep A & E services in Macclesfield. I have signed the petition to protect A & E services, which can be found at https://petition.parliament.uk/petitions/171296  and would urge every local resident to do the same. In addition, I would encourage local residents to make their views known to those who will be making the decisions on the future of local health services, including: Jerry Hawker, Chief Officer, NHS Eastern Cheshire Clinical Commissioning Group, jerry.hawker@nhs.net and John Wilbraham, Chief Executive, East Cheshire NHS Trust, john.wilbraham@nhs.net.

“I have requested a meeting with Rt Hon Jeremy Hunt MP, the Health Secretary, to discuss the situation regarding local emergency services. I will also ensure that the views of local residents will be heard through other channels in the campaign to keep Accident & Emergency services at Macclesfield Hospital.”