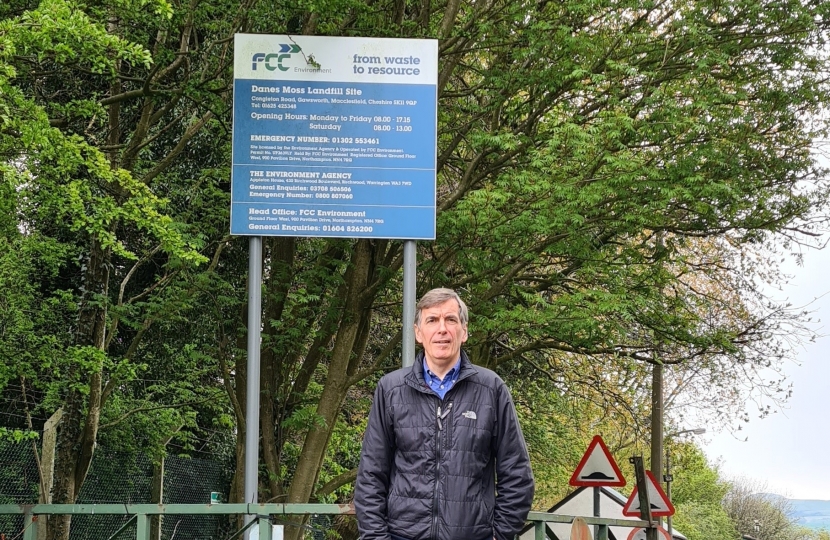 David Rutley, Macclesfield’s MP, has added his strong support to the campaign to keep Congleton recycling centre open. He wants to see the facility go on providing a much-needed service for local residents and warns that its closure would also put extra pressure on the already busy recycling centre in Macclesfield.

David has joined Fiona Bruce, MP for Congleton, and many local residents in opposing Cheshire East Council’s proposals to close the local recycling centre. He also represents constituents in the south of the Macclesfield constituency who regularly use the Congleton facility. Like Fiona, David believes that residents should expect convenient, accessible facilities for the disposal of household refuse to be a basic service that the Council provides Council Tax payers.

Closing the Congleton recycling centre would make it more difficult for residents to recycle regularly and play their part in helping to tackle climate change. David highlights that the closure would lead to longer journey times to use other facilities and more air pollution, while also increasing demands on Macclesfield’s well-used recycling centre. He has further concerns that the proposed closure would lead to increased illegal fly-tipping, especially in neighbouring rural areas.

David has previously opposed plans to close the recycling centres in Bollington and Poynton, which were also set out as options in Cheshire East Council’s Household Waste and Recycling Review.

Speaking about the campaign David said, “I am strongly supporting calls to keep Congleton recycling centre open. Working closely with Fiona Bruce – Congleton’s hardworking MP – I am urging Cheshire East Council to change its plans to close the facility. I hope that the Council will listen to the concerns of local residents, accept that the closures would be environmentally harmful and keep Congleton recycling centre open."

David Rutley, Macclesfield’s MP, is calling for Lyme Green to remain part of the area served by Sutton Parish Council.