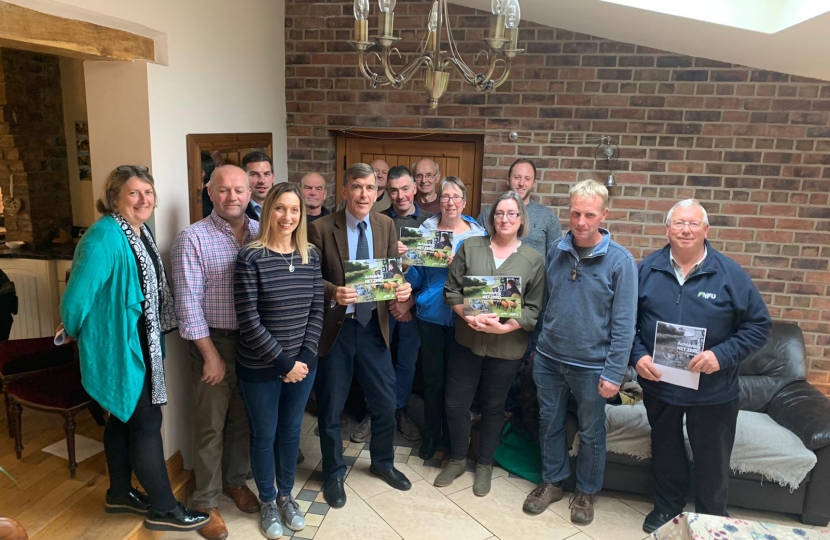 Taking action to reduce carbon emissions was at the top of the agenda when Macclesfield MP, David Rutley, met with local representatives from the National Farmers' Union, to discuss its new report, 'Achieving Net Zero: Farming's 2040 Goal'.

David heard that the NFU report sets out three pillars of activity that will help the farming industry to reach the ambitious goal of achieving net zero emissions in the farming sector by 2040. These are: improving farming’s productive efficiency; enhancing land management and changing land use to capture more carbon; and boosting renewable energy and the wider bio-economy. David congratulated NFU members on the practical and proactive steps that the organisation is taking to help ensure farming contributes to the important task of cutting carbon emissions.

At the meeting, David also updated attendees on the Government's important Environment Bill. This landmark legislation, which was announced in the Queen’s Speech on 14th October and introduced to Parliament recently, will help to position the UK as a world leader on improving air quality, environmental biodiversity, a more circular economy, and managing precious water resources in a changing climate.

Kindly hosted by Martin and Sarah Wheelton from Mill End Farm in Gawsworth, the well-attended meeting also focussed on other current issues of concern to farmers, including the UK's withdrawal from the EU and the importance of promoting local producers and supporting UK food production. In the wake of the serious flooding incidents earlier this year, David also highlighted how more natural land management techniques can contribute to enhanced flood resilience.

Speaking after the meeting, David said, "It was great to hear more about the National Farmers' Union's clear and positive commitment to proactively addressing the challenges of climate change and ensure that the farming sector takes the necessary steps to help cut carbon emissions. This important work will be complemented by the new legislation being introduced by the Government to help protect our environment. I will continue to support the NFU in this vital work in the months ahead."