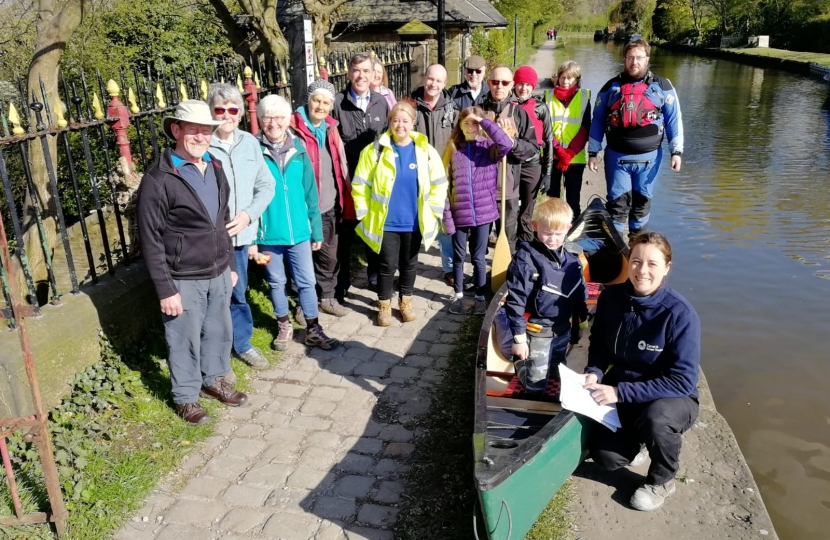 Dozens of volunteers took part to assist with the organised clean up, including from the Bollington Towpath Group. Starting at Adelphi Mill in Bollington, where the Canoe Club store is based, the clean-up operation worked its way down the canal in the direction of Macclesfield for around 3.5 miles. Volunteers either took to the water in kayaks and open boats, using nets to fish out debris from areas that were only accessible from the water, or made their way down the towpath on foot, gathering up litter and waste with hand-held equipment.

A huge variety of waste and litter was collected from the canal, ranging from typical plastic waste, to tyres, a bin, a large metal drum, and assorted quantities of natural debris such as tree branches. David, who is also a Minister at the Department for the Environment, Food and Rural Affairs, thanked all the volunteers present for taking the time to contribute to this positive initiative.

This was the second annual clean-up of the Macclesfield Canal. Last year, the Macclesfield and District Canoe Club organised a similar event, at which a large amount of litter and waste was also collected.

Speaking after the event, David said, "The Great British Spring Clean is a great opportunity to make a positive difference in our local towns and villages, and build community spirit at the same time. I am grateful to all the local groups and volunteers who took part in cleaning up the Macclesfield Canal, and helping to make it a better environment for all to enjoy."