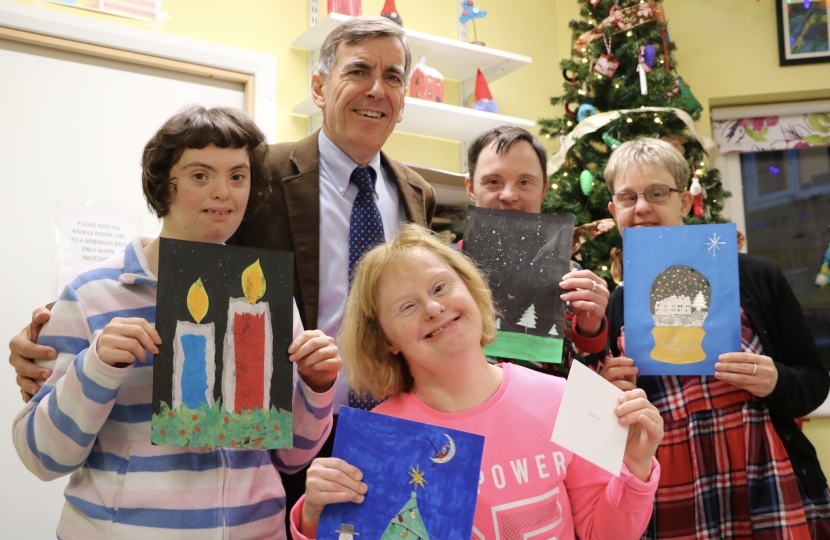 Festive cheer was in the air when David Rutley, newly re-elected Member of Parliament for Macclesfield, visited local charity, Rossendale Trust on Friday 13th December 2019, to thank its tenants for designing the Christmas image that will feature on his Parliamentary Christmas card this year.

Andrea Bennett produced a colourful and jolly Christmas tree scene with a snowman and Father Christmas, which will be sent to hundreds of recipients in the run-up to Christmas Day. They include: local residents, civic leaders, schools and community groups, as well as many Government Ministers and other Parliamentarians. The cards were produced earlier in the year, before the General Election was called.

David, who is Patron of the Rossendale Trust, thanked Andrea and the Oakwood Art Group for their excellent artwork, and wished all at the charity a Happy Christmas. He also took the opportunity on his visit to speak with tenants and staff members at the Trust about the important work that it does to support local people with physical and learning disabilities to lead happier, more fulfilled and independent lives.

Speaking after his visit, David said, "Andrea and her fellow tenants produced a festive and fun set of designs, and I am very pleased to be able to share their impressive artwork more widely by featuring it in my Parliamentary Christmas card. Andrea and the Oakwood Art Group should be rightly proud of their efforts, which I am sure will bring a smile to all who receive the card. I wish all at the Rossendale Trust a very Happy Christmas and I look forward to continuing to work with them in the year ahead."