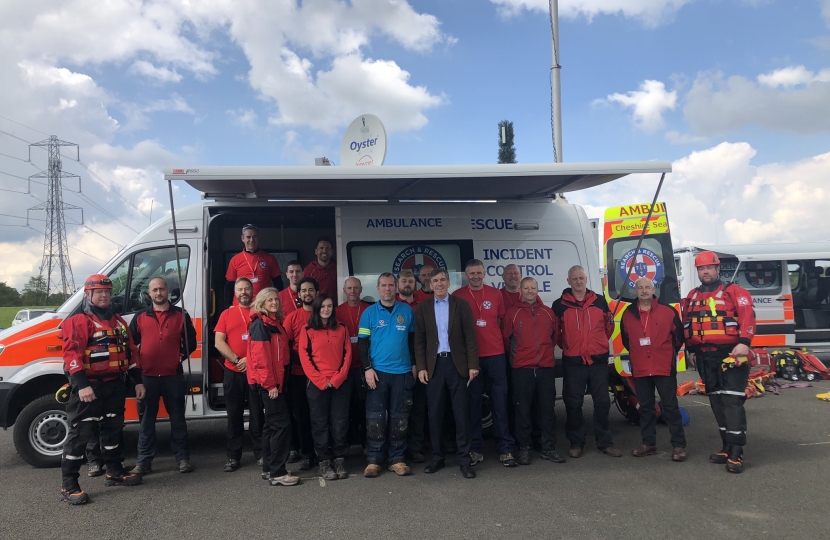 Macclesfield Beer Festival was another big success, and local MP, David Rutley, visited to give his support to this well-established and popular community event, which this year is expected to have raised around £20,000 for the important work of much-valued local charity Cheshire Search and Rescue.

Cheshire Search and Rescue assists Cheshire Constabulary in undertaking vital and sometimes life-saving searches for vulnerable missing people, across the whole county. Thanks to the generosity of local residents attending the Beer Festival, and its organisers, the service will now be able to purchase new lightweight Automatic External Defibrillators; winter clothing to boost the ability of members to respond in extreme weather conditions; and digital repeaters to increase the service's communications network to cover the whole county, reducing response times and increasing the chances of reaching casualties quicker

The Beer Festival was held across the weekend of 10th - 11th May, and once again featured a host of craft beers and ales, including a number from local breweries in Macclesfield, Bollington, Poynton and Wincle, as well as from further afield. The popular gin and prosecco bars were also back, and food was available throughout the festival. Local bands The Chinese Marbles and XDC performed live sets throughout the Festival.

David met with Festival organiser, Ben Whiteley, and his dedicated team of volunteers, without whose hard work, energy and dedication, this popular fixture in the local Macclesfield calendar would not be possible. David thanked Ben and the team from Macclesfield Roundtable for all that they do to help organise and promote this positive local community event.

Speaking after his visit, David said, "Macclesfield Beer Festival remains a much-valued fixture in the local calendar, and it was great to see such a strong turnout from the community. As ever, I am grateful to Ben Whiteley and the team at Macclesfield Roundtable for organising and hosting the event, and to all those who attended and made it such a success, raising vital funds for Cheshire Search and Rescue Service at the same time."