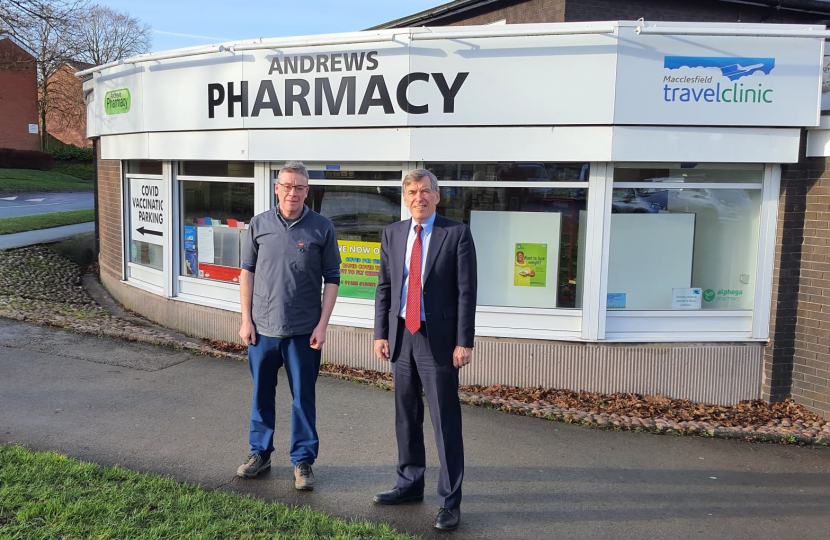 Well-respected local pharmacist, Andrew Hodgson, owner of Andrews Pharmacy in Macclesfield, has been appointed a Fellow of the Royal Pharmaceutical Society in recognition of his remarkable contribution in supporting the local coronavirus vaccination programme and his wider work in the community. Local MP, David Rutley, met with Mr Hodgson recently to congratulate him on this much-deserved award.

The fellowship is one of the highest honours that can be bestowed upon those working in the pharmacy profession. It can only be awarded following nomination by other Society members, and is limited to pharmacists who have shown particular distinction in the course of their careers. This makes the honour all the more special, as it shows how highly regarded the recipient is by the wider profession.

There is no doubt that Mr Hodgson and his team have played a key role in the success of the local vaccine programme. Andrews Pharmacy on Kennedy Avenue, Macclesfield was among the first in the North West to administer the vaccine, and has given well over 100,000 first, second and booster jabs. What is more, the team have gone above and beyond to reach as many local residents as possible, including through their popular pop-up vaccine clinics at Macclesfield FC.

David and Mr Hodgson agreed that it is positive that vaccination rates across our area remain very high, and that increasing numbers of people who have not yet been jabbed are coming forward to get protected. It’s never too late to be vaccinated, and details of future walk-in clinics at the pharmacy can be found on the NHS ‘Grab a Jab’ site.

Looking ahead, Mr Hodgson outlined to David the pharmacies’ exciting plans for the future. They include further development of the pharmacy’s Travel Medicines Service, as well as making preparations to develop the NHS Weight Management and Blood Pressure services in the coming months. It will also continue to support the vaccination programme as it enters the next phase.

Speaking after his meeting, David said, “This honour is richly deserved. Andrews Pharmacy has been a much-valued part of the local health landscape for three decades, and its role in protecting residents against Covid is truly impressive. Andrew, his team, and all those who continue to volunteer at the pharmacy deserve our thanks for the dedicated service they give, and I wish them continued success with this vital work into the future.”

Our local NHS doctors, nurses and support staff have played a vital role in tackling the coronavirus pandemic. I welcome the £2.1 million investment in the Intensive Care Unit at Macclesfield Hospital and the opening of The Christie Cancer Centre at the hospital.

We are all very grateful for the fantastic work of local medical teams in rolling out the coronavirus vaccine in our area.