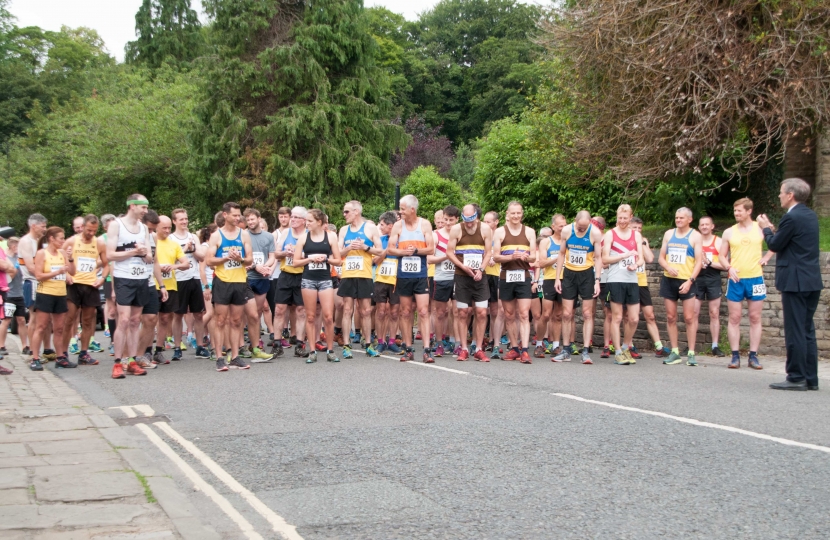 The annual Bollington Nostalgia Hill Race on Sunday 14th July was another great success, helping to highlight the valuable work of much loved local charity The Bridgend Centre, and local MP, David Rutley, was on hand to start the race.

This was the 15th Bollington Nostalgia Hill Race. The race was once again organised by the team at the Bridgend Centre, with entry proceeds helping to raise vital funds for the Centre whilst also being a fun day for people who enjoy fellrunning and a way to encourage people to take part in outdoor physical activities. This year, over one hundred runners took part, raising vital funds to support the important work of the Centre in assisting those within the local community who may be feeling isolated or experiencing loneliness.

David said a few words of encouragement to the participants ahead of the race, before officially firing the starting gun, alongside the Mayor of Bollington, Cllr Roland Edwards. Once again starting from the Bridgend Centre on Palmerston Street, the 6.77 mile run followed a course around Bollington, covering a number of different terrains, including road, pasture, high moorland, and canal towpaths, all set within the beautiful countryside around the town. The highest point of the course was Bakestonedale Moor commanding spectacular views of the local area, and runners made 1,140 feet of ascent in total.

The Centre also held an open day during on race day, enabling local residents to learn more about its work. David met with representatives from the charity and discussed its ‘Bridgend Buddies’ service, which aims to combat isolation in the Community, by teaming up volunteer ‘buddies’ with an individual who has become socially isolated as a result of their personal circumstances. The Centre is currently recruiting volunteers to the role of Buddy, and any local residents interested in volunteering with the Centre can contact 01625 576311 or info@bridgendcentre.org.uk, to find out more.

Speaking after the race, David said, "This year's Bollington Nostalgia Hill Race was another fantastic success. It was great to see so many people taking part in support of the Bridgend Centre, helping to raise much-needed funds to support its important work within the local community. I am grateful to all at the Centre for one again organising the race, and wish it continued success going forward."