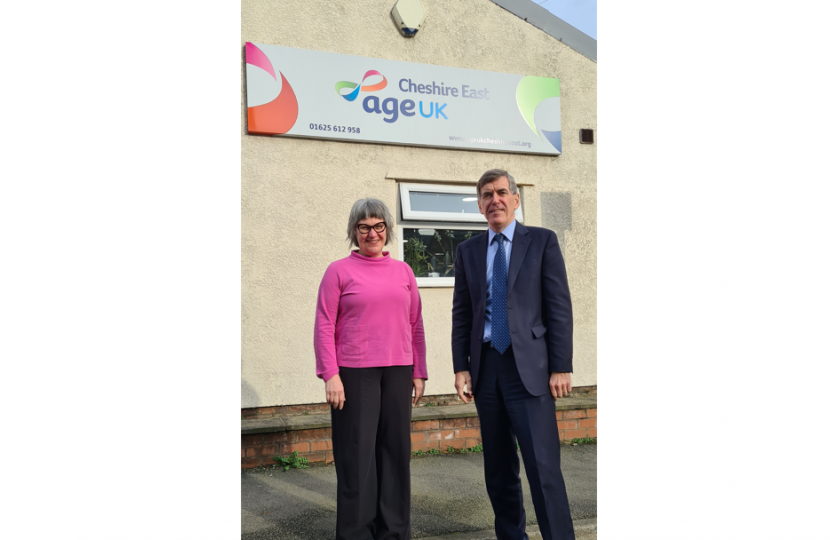 Age UK Cheshire East has launched a “Big Old Survey”, to take the temperature among older people in the area and build up a better picture of their wants and needs. Macclesfield MP, David Rutley met with the charity’s newly appointed Chief Executive, Lynne Elliot, to hear more about the survey’s aims and how Age UK Cheshire East hopes the findings will make a positive difference locally.

The survey – the first of its kind to run locally – is focused on those aged 50 and over, and comprises around a dozen questions, some about personal health and wellbeing issues, but also those affecting responders’ families, friends and wider neighbourhood, as well as the services and activities that Age UK Cheshire East offers. This will help to build up a full and comprehensive picture about what it’s like to be an older person living in Cheshire East today.

Lynne explained that Age UK Cheshire East is always looking at how it can improve the already much-valued services it offers, but that, as we move out of the pandemic, it became clear there was a more pressing need to review the concerns and issues that older people face. That includes action to address social isolation, as well as improving physical activity, with many older people having been required to shield or stay at home during the pandemic.

The results of the survey will support plans that Lynne already has underway to develop an active network alongside other charities and community groups that support older people, to best serve their needs. That work is ongoing, which is why charities like the Deaf Support Network (formerly the Cheshire Deaf Society), as well as Healthwatch Cheshire East are helping to promote the survey, so that it reaches as many local people as possible.

There has already been a positive response to the survey, and there is still time to have your say. Any older residents who haven’t yet filled the survey in can do so online at www.surveymonkey.co.uk/r/BigOldSurvey2021. Paper copies are also available in local libraries and community centres, which can be submitted either by post to Age UK Cheshire East, New Horizons Centre, Henderson Street, Macclesfield, SK11 6RA (freepost envelopes are provided), or by scanning a copy and emailing it to enquiries@ageukec.org.

Speaking after the meeting, David said, “The last couple of years have been like no other, which makes Age UK Cheshire East’s Big Old Survey even more worthwhile. The charity carries out vital work locally and seeing how older people’s needs have changed during the pandemic is key to shaping its future services. It will only take a few minutes to complete the survey, so I would encourage any older residents who haven’t yet taken part to do so. The feedback received will make a real and meaningful difference to older people in our area at this important time.”

Our local NHS doctors, nurses and support staff have played a vital role in tackling the coronavirus pandemic. I welcome the £2.1 million investment in the Intensive Care Unit at Macclesfield Hospital and the opening of The Christie Cancer Centre at the hospital.