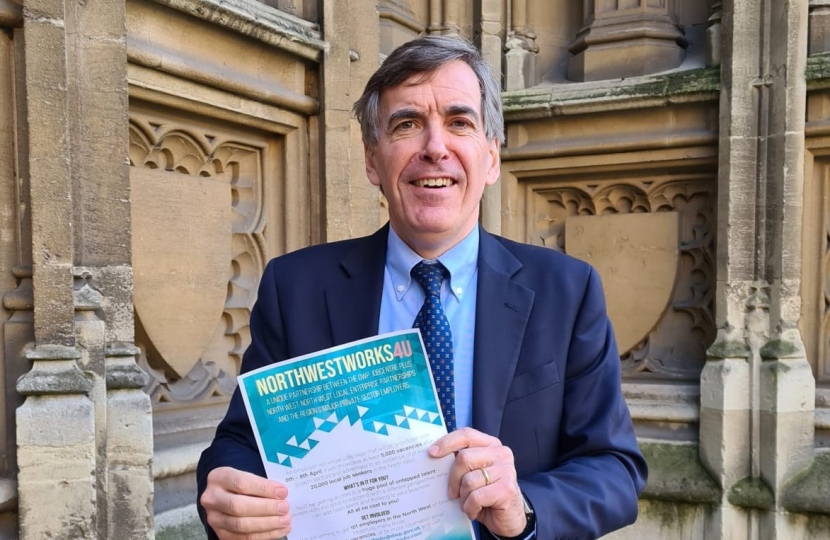 Building on the achievements of the CheshireWorks4U digital jobs fairs over the last year, Macclesfield’s MP, David Rutley, is now actively supporting the ambitious NorthWestWorks4U event planned for early April to help better connect job seekers with available employment opportunities in our area.  The event, which puts on the same live virtual platform the region’s job centres with some of its largest employers, is thought to be one of the first of its kind in the UK.

At a special pledge event planned for Wednesday 3rd March, some of the biggest names in business and public services in the North West will sign up to provide jobs at the groundbreaking event. Co-organised by McCann Global (who have offices in Macclesfield) and Salford based TalkTalk, other organisations pledging jobs include: AO.com, Network Rail, Ministry of Defence, S & P Global, Engie, Kier, Greggs and North West Ambulance Service.

The employer-led virtual jobs fair will run over three days, 6-8 April, and will showcase at least 5,000 jobs in all growth sectors. There will also be support and employability content with practical advice about jobs from over 100 major companies for an expected audience of 20,000 local job seekers across the North West. NorthWestWorks4U is a unique partnership between DWP, Jobcentre Plus North West, North West Local Enterprise Partnerships and the region’s major private sector employers. Other employers who would like to participate can contact: dwpnorthwest.works4u@dwp.gov.uk

The event will be broadcast from the Jobs Live platform which allows for live interaction, content delivery, as well as hosting thousands of job vacancies. There is no cost to take part either as a jobseeker or a prospective employer. More information about this innovative new event can be found by visiting: www.northwestworks4u.com

David is pleased to see that there is a clear commitment to “pledge” a percentage of the advertised vacancies for individuals who have not had the opportunity for whatever reason to gain sustainable employment. Participants will go the extra mile to provide pre-employment training and recruit differently by looking at the individual, rather than academic qualifications or previous experience in a similar role.

Macclesfield’s MP has been supporting the CheshireWorks4u virtual jobs fairs since the very first broadcast in July 2020, as an innovative and unique way of bringing job seekers and employers together across the county. The jobs fairs have been a great success, often attracting views in excess of 10,000 candidates and advertising thousands of vacancies.

Following the launch of the NorthWestWorks4U event, David said, “It’s great to see such strong support for this important event from both the public and private sectors, and that it is being backed by MPs from across the political spectrum. I am delighted that virtual jobs fairs in our area have now taken another huge stride forward, not only in their geographical reach to include the whole of the North West, but also in terms of their ambition to find new ways to help those who have not been able to gain sustainable employment. This is a very positive step forward.”

I am actively working with AstraZeneca to support its future ambitions for its Macclesfield site. We need to support our vibrant life sciences sector and vital small businesses to create more local jobs.