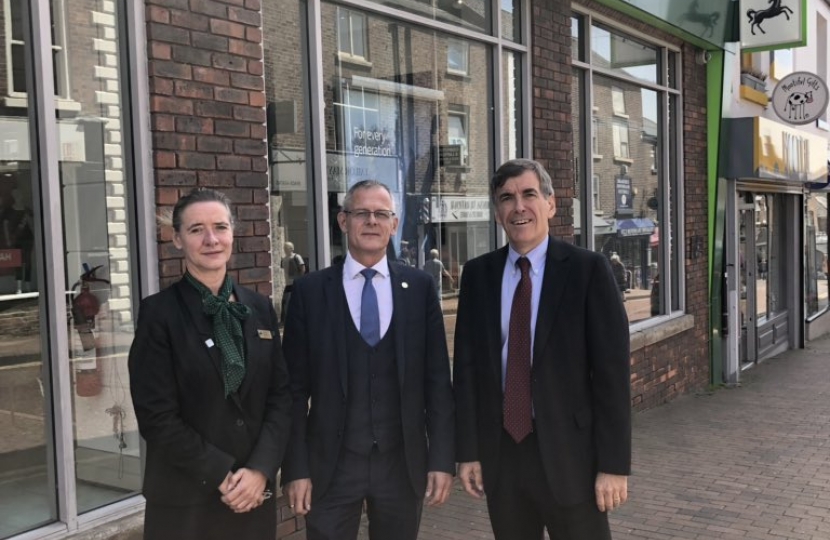 Consumer protection was the key focus when local MP, David Rutley, visited Lloyd's Bank branch in Macclesfield, to learn more about its participation in the Banking Protocol scheme, which brings together banks, law enforcement agencies and government, to help tackle fraud.

On his visit, David met with Senior Bank Manager, Phil Marr, and other staff at the bank, who explained that the Protocol was introduced in 2016, in response to increasing concern about fraud and financial scams. It is a rapid response system that enables bank staff to more easily contact the police if they feel a customer is being scammed. Staff suspecting fraudulent activity call 999 and then, using an agreed code word, receive immediate priority response from the police to the branch in question, facilitating swifter investigation of the possible fraud and more effective customer safeguarding.

David was pleased to learn that the Protocol has been rolled out across all Lloyds Banking Group branches, with a total of 48 other financial organisations, including the Post Office, also signing up to this scheme. Last year, the Protocol assisted 1,649 Lloyd's customers, collectively saving them nearly £13.8million. Across all participating banks, nearly £48 million of fraud has been prevented since it went live in October 2016, with 408 arrests made in the same period.

At the bank, David also heard from constituents directly who had been given support from staff in the branch in tackling these harmful activities. He also learned about the positive outreach work that Lloyd’s is doing with younger people, to help ensure that they are scam-aware and take steps to better protect themselves from possible fraud.

Speaking after his visit, David said, "Tackling fraud and scams and protecting vulnerable people at risk of scams must remain a high priority for financial institutions and law enforcement. It was good to learn more about this positive scheme, which is helping to proactively identify possible instances of fraud and ensure that those responsible more swiftly face justice. I am pleased that it is already widely adopted across the financial services sector and I hope that this will continue going forward."