All Hands On Deck With Macclesfield Canal Society 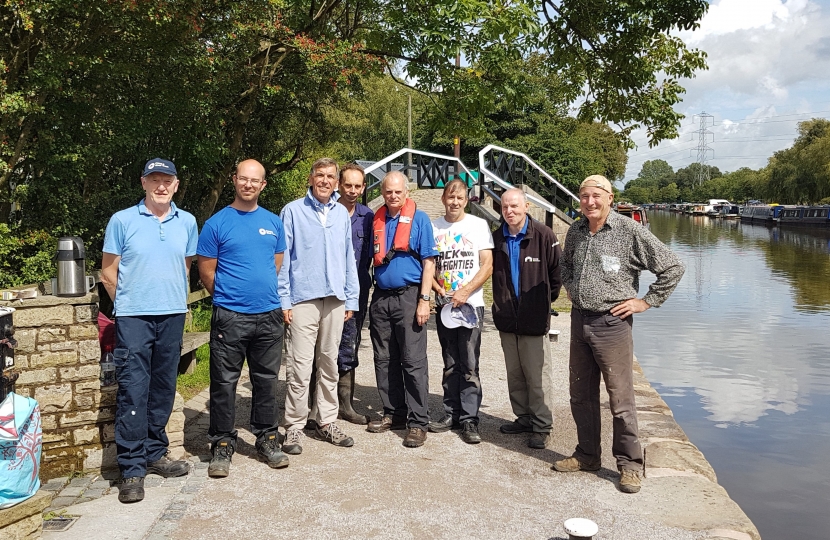 Macclesfield Canal Society's important and much-valued work maintaining local waterways was fully on display recently, when local MP, David Rutley, pitched in for one of its regular clean-up sessions.

David joined Society members at the Nelson Pitt area of the canal in Higher Poynton, where the focus for the day was on repainting and weather-proofing the Braidbar Bridge, which was receiving its second coat. Volunteers were also engaged in weeding and removing moss from brickwork around the canal, which David assisted with. As ever, David was impressed to see the clear dedication and commitment of Society members to protecting and promoting this precious heritage for the continued use and enjoyment of residents and visitors alike.

On the day, David spoke with Duncan Learmond, Secretary of the Macclesfield Canal Society, along with colleagues Piers Lambert and Steve Sheldon, who explained that tasks such as these are a regular part of the Society's calendar, with dedicated teams working regularly at each section of the Canal, including Macclesfield, Bollington and Congleton. Other jobs the Society regularly carries out include: tidying or repair of towpath; pruning canal side vegetation; and re-instating towpath features, such as benches or mooring rings. This work is undertaken in conjunction with partner organisations such as the Canal & River Trust and the Inland Waterways Association, as well as local authorities.

The Macclesfield Canal Society was formed in 1984, and currently has around 130 members, who mostly live in and around the Macclesfield area. The Society is always pleased to welcome new members, and any local residents interested in getting involved with the Society's work can contact Mr Learmond at: secretary@macclesfieldcanal.org.uk

Speaking after his visit, David said, "Macclesfield Canal is an important part of our rich heritage, and is used regularly for a wide range of outdoor recreation activities. It was great to see once again how the dedicated and active work of Macclesfield Canal Society members is helping to protect this important environment and ensure its continued enjoyment. I am very grateful for all their hard work."