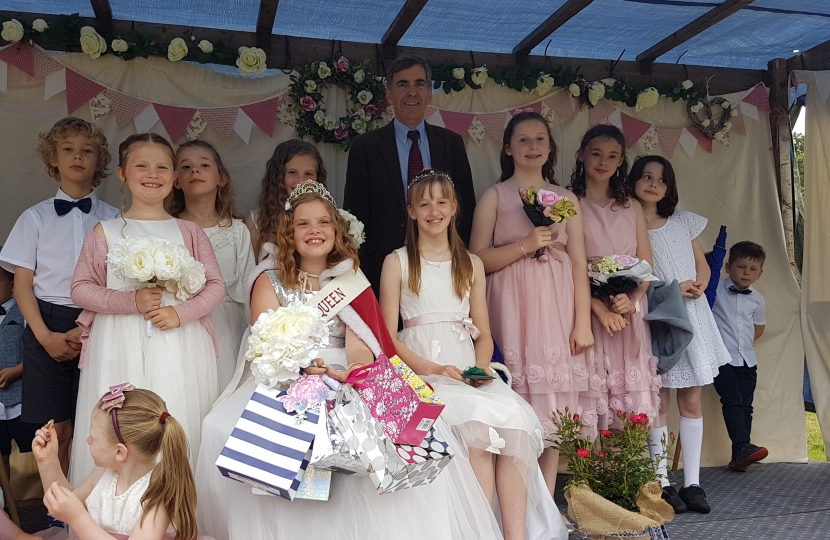 Lower Withington’s Rose Day was an extra special event this year, as it marked 70 years since the village’s first Rose Queen was crowned, and local MP, David Rutley, joined residents for this much-loved community tradition and crown this year’s Rose Queen.

Over thirty previous Rose Queens were present at the Fete, each of whom were presented with a commemorative slate board engraved with the year in which they held this office. This year’s Rose Queen is Lily Winn, who alongside her attendants, Pippa Winn, Rosie Hutchinson and Ben Hutchinson, received her crown from outgoing Rose Queen, Maisie Frith, and her attendants Evie Beardsell and Maddy Hollingworth.

As ever, the afternoon’s festivities began with the traditional parade, which David took part in, riding alongside the new Rose Queen’s attendants in a vintage 1936 Bentley. Starting from the Chapel Car Park opposite the Village Green, the procession made its way through the village to the Parish Hall, for the coronation ceremony. Following the coronation, David had the honour of declaring the Rose Day Fete officially open.

Visitors also enjoyed a range of stalls, including a number of popular fairground games; stalls selling cakes and bric-a-brac, and a clay pigeon shooting booth. There was also a tug-o-war and children’s races, vintage traction engines on display, and music provided throughout the afternoon from the Lower Withington Brass Band.

The tradition of crowning a Rose Queen is well-established in a number of villages in Cheshire. Lower Withington’s first Rose Queen ceremony took place in 1949 and has been held continuously every year since that point.

Speaking after the event, David said, “Lower Withington’s Rose Festival is rightly a much-loved village tradition, and it was extra special this year to be joined by so many previous Rose Queens on its 70th anniversary. Like many residents, I am very grateful to outgoing Rose Queen, Maisie, and I wish Lily every success as Rose Queen in the year ahead.”